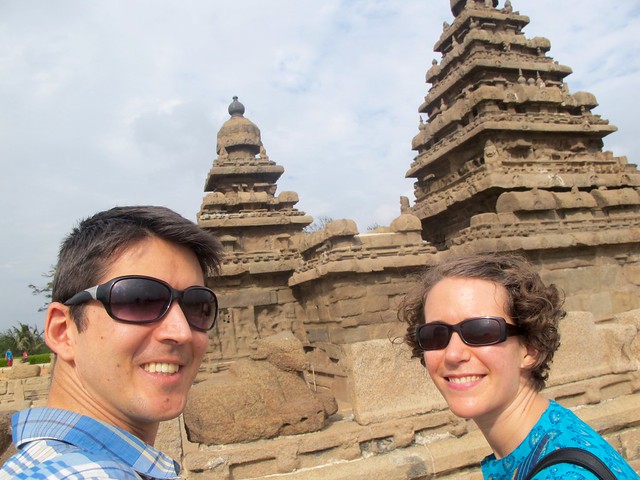 Mamallapuram was the second stop on our Indian adventure – a tourist-friendly beach town just south of Chennai.

When leaving Chennai, we knew that we could take a city bus to Mamallapuram, we just weren’t sure exactly how. Google maps told us to take an urban bus and then transfer to a longer distance bus that goes into Mamallapuram. Since there is so much traffic in the city, we thought it would be faster to take the train out and then catch the long distance bus, so we found a station that should cross the bus route. Well, it didn’t exactly work out that way. We had to walk a few blocks from the station to the bus depot and ended up getting on a different bus than we expected to Mamallapuram. But we got there and it only took just over an hour. 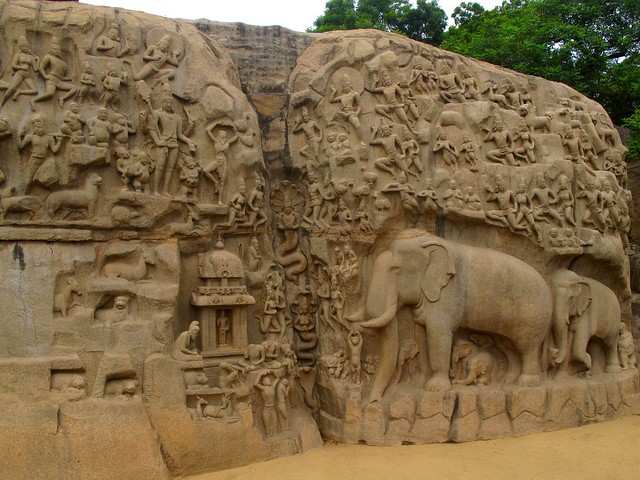 When we arrived in town and started to wander around our guesthouse, we felt like we had been transported to a different world. There were more tourists than cars on the street, every shop was selling the same tourist items (water, toilet paper, clothing, and stone carvings), the restaurants were advertising seafood and coffee. Eventually we realized that the town really has been built around tourism, especially after the Shore Temple become a UNESCO World Heritage Site, and that there was another part of town where the locals conducted their lives. 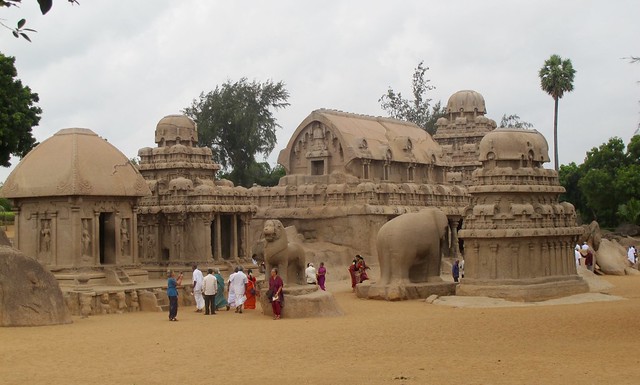 So many tourists come to Mamallapuram because it has the earliest surviving Pallava rock carvings. There are numerous rathas, caves, bas-reliefs and temples right in town and within a hundred meters of the beach. Most of the structures were created to show off the talents of the local stone carvers, an art form which is still done in town but as stand alone pieces. The carvers created these massive structures by chipping away at rocks embedded in the ground, from the top down. The detail is amazing, even after centuries of wind and ocean beating them down. 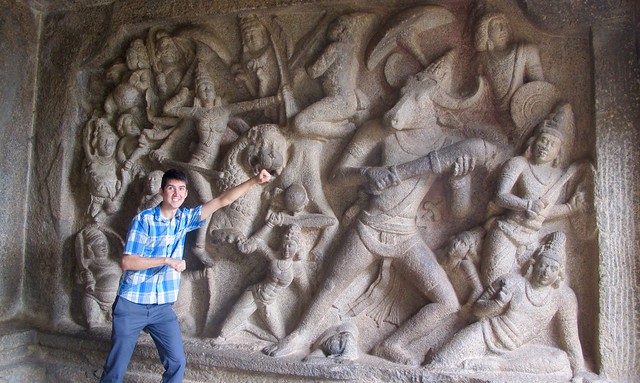 There is a nice sandy beach, but the waves are too strong for swimming. It’s mostly used by fishermen, dogs, and cows. We did end up walking back into town from the Tiger Cave (about 5 km’s) along the beach and it was quite pleasant. 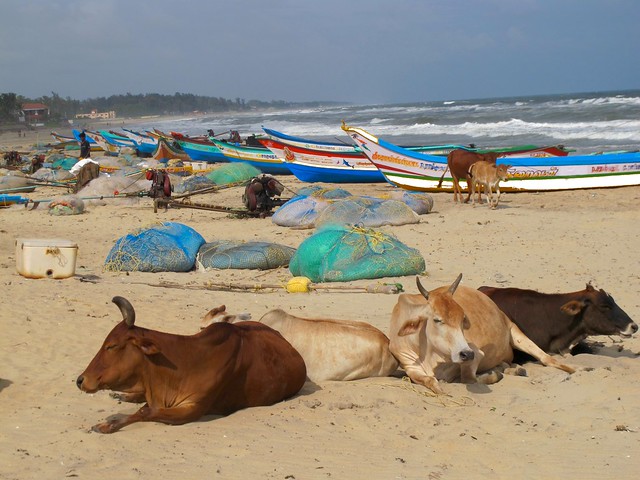 We sampled a few of the tourist restaurants, in addition to our regular pure veg meals. It was generally disappointing, either because of the food or the service. The tourist food usually includes seafood, burgers, pizza, pasta, Chinese, and other things that aren’t particularly vegan friendly. So we often ended up ordering Indian dishes for four times the price and half the tastiness. Some of the touristy restaurants have a nice ambience, and it was a treat to have things like walnut pie and beer (Tamil Nadu is technically a dry state). 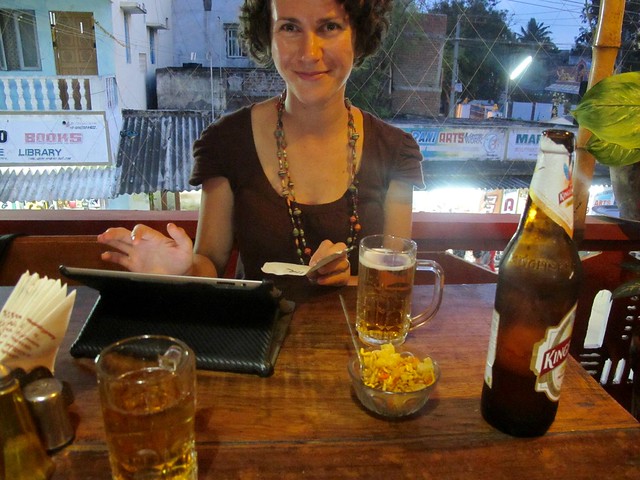 Since Chris was recovering from his food poisoning, we ended up taking a taxi from Mamallapuram to Pondicherry. We were disappointed to miss out on another bus adventure.

A day of firsts here in Mamallapuram.

First morning run – I only made it 2.5 km before the heat was too much.

First long walk down a sandy beach. We walked back from the Tiger Cave. A beautiful hour long walk.

First beer – we shared a Kingfisher before dinner. Tamil Nadu is technically a dry state, but a lot of the restaurants here have alcohol if you ask.

First night spent puking my guts out. Not sure what it was. Maybe the heat, the beer, or some contaminated food. I’m feeling better this morning, but I was throwing up all night and had the chills. If any symptoms come back I’ll have to see a doctor.