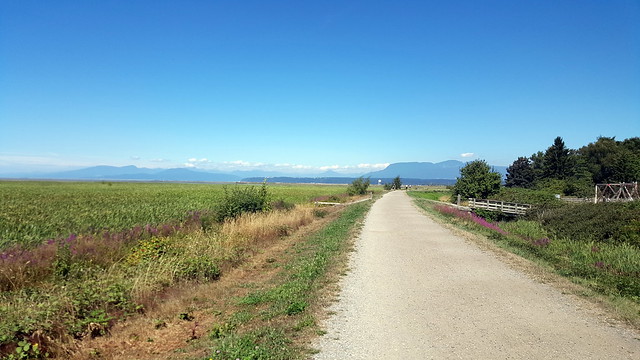 Emily and I celebrated BC Day with a lovely bike ride to Steveston. It was our first time biking there and I was really impressed. I never knew Richmond had a good network of greenways, trails, and bike lanes. Obviously other people did, because Steveston was packed with cyclists. 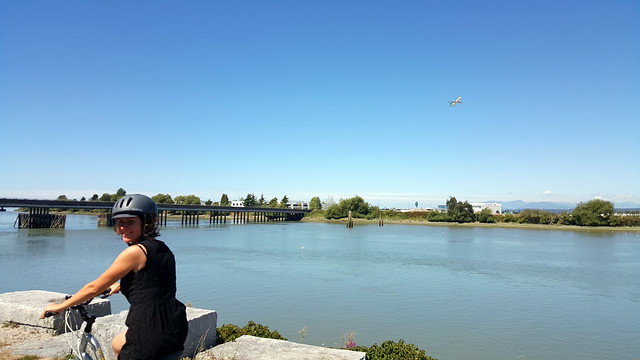 We took the SkyTrain to Aberdeen and then biked along the Middle Arm Trail, past the Olympic Oval and across from the airport, where we had great views of planes taking off from YVR and float planes landing on the river. 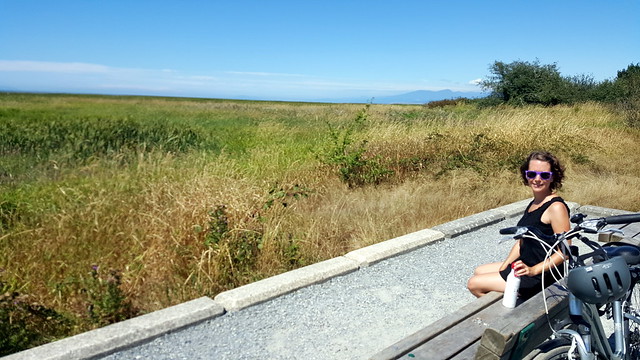 We continued down the West Dyke Trail, past marshy tidal flats and a farm with grazing cows. 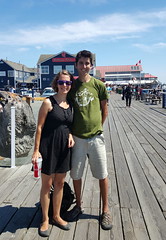 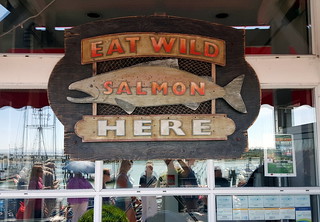 In Steveston, we wandered around town, checked out the pier, and ate deep-fried oysters, wild salmon, and chips (bad vegans, I know). I was surprised how many tourists in Steveston were there to check out Storybrooke, the fictional town Steveston becomes when Once Upon a Time is filming. 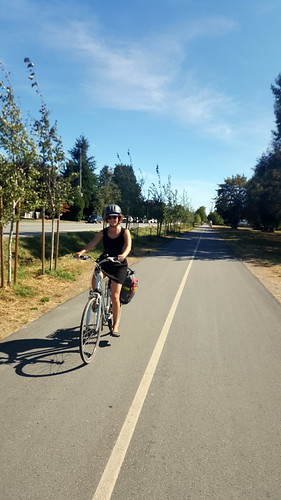 Our return trip was a quick zip down the Railway Greenway, a paved and separated route running the length of Richmond. The greenway follows the old Interurban train line and the former stops are marked with timetables painted on the ground – a clever way to highlight the history of the route.

All-in-all, it was a great, relaxing bike ride and a fun day. The route is completely flat and mostly separated from automobile traffic. Steveston is a perfect destination, with a popular pier, restaurants, and fish market. A perfect day trip. 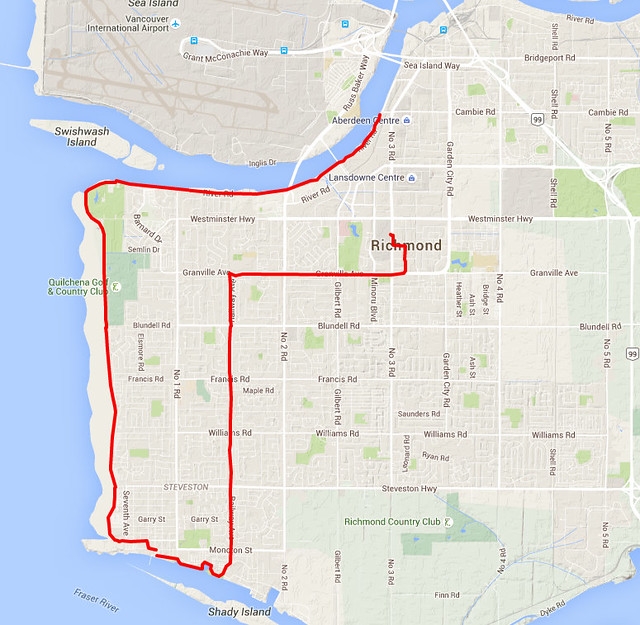 For the September long weekend, Emily and I decided to have car-free adventure on Salt Spring Island, using our bikes and public transport to get around. It was cheaper not having a car and a lot less stressful not having to worry about ferry reservations but it was hard work biking up all those damn hills.

We stayed at the bike-friendly Duck Creek Farm. We were planning on tenting, but we couldn’t resist the chance to stay in their cozy bus. We were able to travel lighter without camping gear and we stayed completely dry.

The bus was a unique experience. It took a bit of detective work to figure out where to “check in”. Once we finally found the owner Sue, she commented: “I should really give better directions, but I figure if people were meant to be here they’ll find their way”. Sue is a true hippy and a lovely lady. The bus didn’t look like much from the outside, but the inside was really comfortable – with a double bed, a well-stocked kitchen and gas stove, hot water for washing up, electricity, and mood lighting.

Biking around Salt Spring Island was ok. The hills can be a challenge, especially when you’re on heavy city bikes loaded with gear, but it’s manageable. The infrastructure on Salt Spring Island is really varied and inconsistent. There’s a few sections with bike lanes painted on the shoulder or separated gravel paths, but they never last for long. Most of the time you’re sharing the road with fast moving traffic. We logged over 50 km biking riding from Duck Creek to Ganges, out to Beddis Beach, and to the ferry terminal.

Ganges is a great little town. The Saturday market has lots of fresh fruit and vegetables, prepared food, and local crafts. The whole town is compact and walkable, with lots of great restaurants and stores along the waterfront. We had good dinner at the Tree House Cafe. We wanted to try out The Gathering Place (a cool looking tapas place with a huge selection of board games) and Rawsome Living Foods, but both had really limited hours and were closed whenever we wanted to eat.

The hardest part of the trip was probably getting to/from the Tsawwassen ferry terminal. It’s easy to take your bikes on the Canada Line to Bridgeport, but from there you’re competing with a lot of other cyclists for 2 bike spots on each infrequent 620 bus to Tsawwassen. We were lucky on the way down to have a bus driver allow us to carry our bikes onto the bus, as the front rack was already full. On the way back we had to wait an hour before we got our bikes onto the third bus.
END_OF_DOCUMENT_TOKEN_TO_BE_REPLACED

I love sunny weekends in September. Yesterday, we had a great time biking around New Westminster. After hearing about the Queensborough Loop on CBC Radio, we thought it would be fun to explore that part of Greater Vancouver.

So we loaded our bikes on the SkyTrain in Vancouver and headed out to the ‘burbs. We started our ride at New Westminster station and ended at the 22nd Avenue station. 22nd Avenue is closer to the Queenborough Bridge, but New Westminster allows you to explore the waterfront area.

New Westminster has a great riverside quay, dotted with restaurants, shops, and condo developments. The paths are wide enough for walkers, runners, and cyclists.

After the riverside trail, we had to bike along the street and almost ended up on Stewardson Way (a busy 4-lane highway). The bike route signage at 3rd and Stewardson Way is horrible. The only sign we saw looked was buried in a bush and looked like it was pointing us down Stewardson Way. We started biking on the sidewalk of Stewardson Way, but that ended within a block. Unwilling to brave the traffic, we biked up a steep hill. From our vantage point we saw the couple below braving the traffic and the semblance of a bike trail on the other side of the street under the SkyTrain. We backtracked and found the unmarked entrance to the bike route in a parking lot.

The BC Parkway Trail sure seems like it was built as an afterthought, with cobbled together segments of inconsistent width and quality. But it did get us to the Queensborough Bridge without having to deal with traffic, so I’m grateful it was there. It also had the saddest scenic lookout I’ve ever seen.

Getting over the Queensborough Bridge was easy, but only because we didn’t run into anyone else on the narrow, 2-way shared cyclists/pedestrian bridge sidewalk.

Queenborough was a mix of gritty industrial sites and modern suburban developments. We had a rough idea of the loop we were supposed to take. There isn’t much traffic so it was fine just biking around and getting lost.

There were some nice off-road trails.

And some fun parks.

Rhea did most of the organizing for bike ride and packed an awesome picnic lunch for us.

END_OF_DOCUMENT_TOKEN_TO_BE_REPLACED 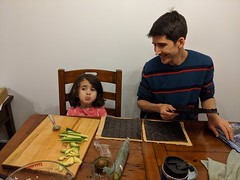 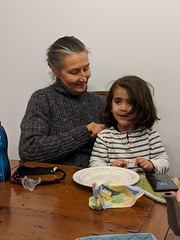 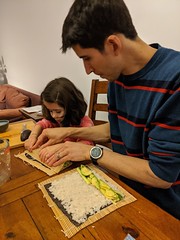 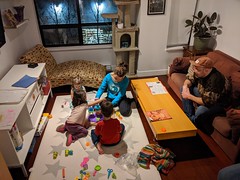 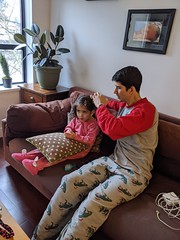 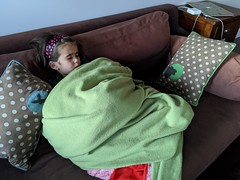