The City of Vancouver is looking to upgrade one of its busiest bike routes, Adanac/Union. Although the project hasn’t garnered the same media attention as the proposed greenway along Cornwall, this is a very exciting project for cyclists. I use the route everyday on my commute to work, and I think the changes will go a long way to making it safer.

According to the City’s numbers, the route is used for 4000 bike trips and 5000 car trips per day. The city is proposing a number of improvements to reduce traffic and physically separate bikes.

The biggest changes involve restricting car traffic along Union between Quebec and Main, creating separated bike lanes for large stretches, and improving bike signals at the traffic lights. My usual bike route takes me along Union between Quebec and Main, so I’m excited that cars will largely be removed from that stretch. West of Quebec, a two-way, separated bike lane will connect with the Carall Street Greenway. East of Main, parking will be used to shield bikes from traffic.

More information is available on the City’s website and there’s a quick survey you can fill out.

The awesome guys at Walk Score have teamed up with researchers at UBC to introduce their newest mapping project – Bike Score.

Victoria, Vancouver and Montreal rate highest in bikeability for Canadian cities; while Minneapolis, Portland and San Francisco lead in the U.S.

Vancouver’s Bike Score is already pretty good, especially in downtown and in the nearby neighbourhoods. We have a much larger network of bike routes than most Canadian cities. Some of the gaps in the network will be plugged by the recently announced 2012 capital plan improvements, including 3 new bike lanes in south Vancouver. 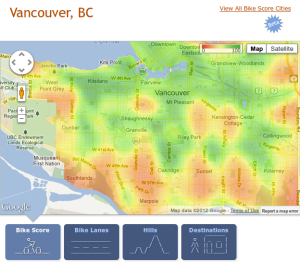 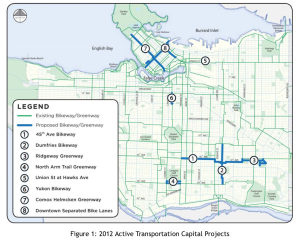