My main recreation goal this summer was to plan a return trip to Garibaldi Lake and Black Tusk. In early July I picked a weekend (August 8-10) and sent out word to anyone who might be interested. We had a group of 12 people who were interested.

The timing of the weekend avoided the massive rock slide on the Sea-to-Sky Highway, but it coincided with horrible weather. A third of our group bailed when they saw the forecast for the weekend. The rest of us decided to go up anyway, hopeful that it wouldn’t rain too much.

We left Friday at 1pm, with sunny skies above us. By the time we drove up to Garibaldi, with stops for food, it was nearly 5pm before we started the hike. It took us 4 hours to hike up to the campsite (7.5 km, 915 m elevation gain) with all of the gear on our backs.

Saturday morning we woke up to drizzle, which turned briefly to hail during breakfast. Luckily the campsite had a cook shelter, so we could avoid the inclement weather while we ate. After breakfast we sat around playing games, waiting for the rain to stop. Around noon it looked nicer out, so we decided to hike up to Panorama Ridge. Even in the rain, the alpine flowers were really stunning. We made to the base of Panorama Ridge before the wind and cold encouraged us to turn around. On the way back we stopped at Garibaldi Lake and I managed to roll my ankle walking down the trail.

Saturday night was party tent time. All eight of us squeezed into a 2-person tent and starting drinking the 8 litres of wine we brought up. We eventually moved into our 3-person tent which was much roomier. Whenever anyone would walk by, we would yell “Whoooo! Party Tent!” and invite them to join us. No one took us up on the offer.

On Sunday, a few of the crew went up to climb Black Tusk in the rain. From the top they could see 360 degree views of the inside of a cloud. My ankle was hurting me, so I stayed back and played cards with Emily, Christina, and Cynthia.

The hike down only took 3 hours, and it was of course sunny when we hit the parking lot.

The weekend wasn’t the best it could have been because of the weather, but I was impressed that everyone made the most of it and no one complained.

For those on Facebook, check out the spaghetti chopping videos. And there is also Christina’s photos from the weekend. 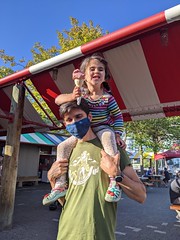 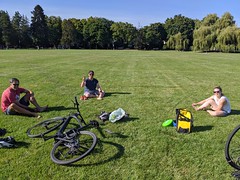 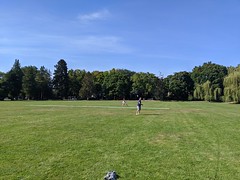 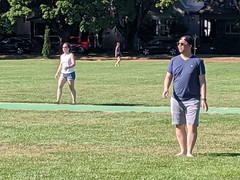 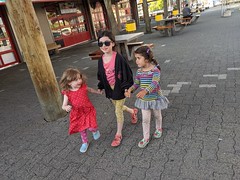 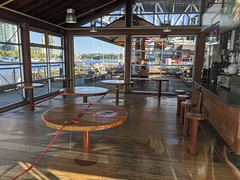 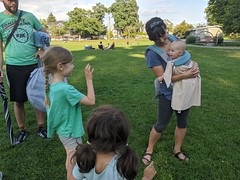 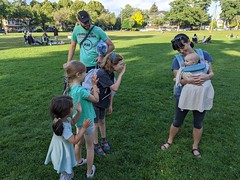